Step 3 - The Psychology of Change

We can design the best processes, guidelines and pathways in the world; but if we fail to acknowledge that those who follow these are human beings and therefore influenced by all the factors that influence human behaviour, we are unlikely to actually get anywhere in improving patient care.

QI inescapably requires working with others to achieve our goals. This could be other doctors as well as nurses, pharmacists, ward clerks, managers and ideally in every project – patients. The interdependency of these colleagues and others in delivering excellent healthcare is crucial to appreciate. Imagine you try and improve a TTO process, you can envisage how impossible it would be going it alone due the resistance you would undoubtedly get. Now imagine the increased chance of your changes succeeding if the ward manager was behind them (asking the other nurses to use your new process), the ward clerk knew exactly how the changes worked, your consultant had made suggestions of their own (which were included) and it aligned with pharmacist dispensing protocols.

The bulk of this guide is on the Model for Improvement (step 4). However we have placed this section on psychology of change at the beginning because in reality improvement is only part process-change and in fact predominantly behaviour/culture change. This is why too often efforts to improve practice fall short, the psycho-social part of the approach is neglected. The tools and concepts below are useful and we strongly encourage you to use them as you undertake your project.

A quick, useful tool to help decide who you might need to ‘get on side’ with your project is Stakeholder Mapping. The term ‘stakeholder’ refers to anyone who could be affected or have an interest in what you are trying to do. This tool is based upon the fact that all stakeholders will have a level of both interest and influence in your project and identifying who has high influence, high interest, or both; will indicate how engaged you need them to be. 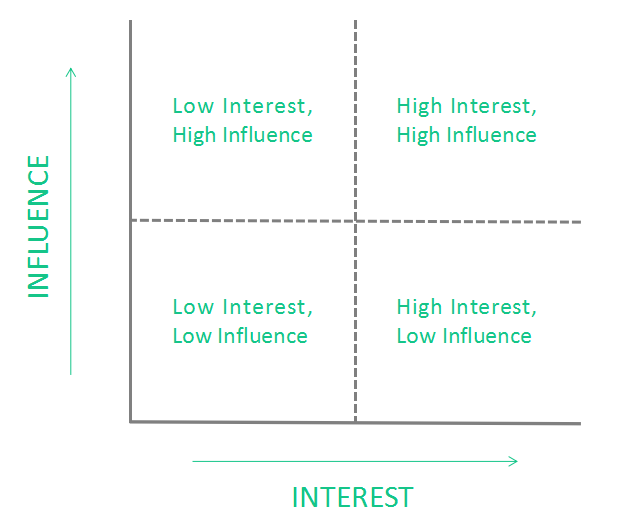 A stakeholder map is simply a chart with influence on one axis, and interest on another. This produces a 2×2 grid where you can insert your stakeholders. Everyone will fall into one of the 4 categories:

High interest, low influence – “Keep informed” – Many people will be potentially affected by changes to practice you’ll be making, but simply due to their position in the system not have the influence to drive through new ideas despite the push-backs of those more senior, or push-back totally on their own authority. These people are key allies and despite having relatively ‘junior’ positions, can feedback how things are being received on the ground as well as suggest ideas of their own. They can be willing participants in the changes you are making, and may even be willing to help in other ways such as collecting data. Note the term ‘low influence’ refers not just to formal authority, but social influence too. A well-liked HCA with a particularly strong personality can potentially have high social influence, despite having relatively low formal influence.

Low interest, high influence – “Keep satisfied” – Generally those in senior/managerial positions are in a tough place, as they get pressure both from ‘the ground up’ (front-line pressures) and ‘top down’ (from the Board and other more senior managers). They will often simply be too busy to take an active, regular role in your project. However they are people who could place an insurmountable barrier in your way if changes are being made to they way their departments work without being aware. They are crucial to have on-side, and you will need to find a way to do this by articulating how what you are doing is relevant to them. In other words these are the people who you just need a ‘yes’ from, but they don’t need to necessarily know all the details.

High interest, high influence – “Work with closely” – These people have authority, and can actively champion your work. This is coupled with the fact they are directly affected by what you are doing, or perhaps have a personal interest. They can suggest how to overcome barriers you face and can be good for bouncing ideas off of. You will need at least one of these people and are typically a senior consultant/clinical director.

Low interest, low influence – “Monitor” – There will be some people who will be affected only slightly by what you are doing and not particularly interested either. This is fine, but you should try and ensure there is no resistance to your changes brewing, which could spill over to others.

When testing new ideas that will improve practice your stakeholders will vary in their opinions, from those who warm immediately to your changes to those traditionalists who are never really sold, and everything in between. Over time, if successful, more and more people will appreciate the benefits your changes (innovations) have brought. The pattern of which this occurs was reliably described by Everett Rogers in 1962. 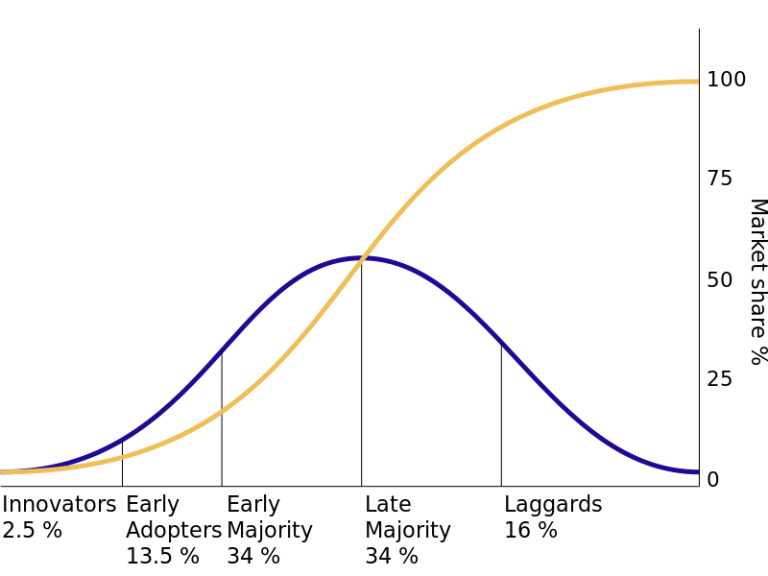 Figure 3.2, Diffusion of Innovations Curve. The 'market share' is equivalent to cumulative levels of adoption of any successful new idea and is represented by the orange line. [image in public domain]

The curve representing the speed of adoption of new innovations has proven to be accurate time and time again, such as the TV, refrigerators, Facebook, etc. It’s not important to understand the theory behind this curve, but the take-away message is an appreciation that there are some colleagues who will be very open to your new ideas from the start – the innovators/early adopters; and there will be some who never fully get behind your project – the ‘laggards’. When faced with opposition to what you are doing from a laggard, don’t feel you need to win them over straight away. You’ll end up spending huge amounts of time and effort with little progress. Simply accept their criticisms, and focus your energy on those who are more willing to work with your changes.

Final Thoughts on The Psychology of Change

As a general rule if people are made to feel like something is being done ‘to them’ (or ‘to’ the way they work) the instinctive response will be to dig in and defend the status quo. There could well be a response like one of these:

“Why are you bothered about this? It works fine already.”
“This isn’t really my problem, you do something about it.”
“We’ve tried and tried to improve this already and it’s never worked.”

An approach much more likely to generate ‘buy-in’ is one where people feel included in the improvement process. It is not something being ‘done to them’, but something they ‘are a part of’. This is the art of improvement, and the most human element of it. The tools above will assist in navigating through this part of the improvement journey but ultimately you should be guided by how things are perceived ‘on the ground’ and adapt accordingly.