Now that we have some change ideas, we need to actually test them. We use the word ‘test’ deliberately as you should be open-minded when trying new ideas – some will work well, others won’t. Don’t become disheartened if your ideas don’t appear to improve anything at first – if we maximise what we can learn from each test it is still considered a successful step on our journey to eventual improvement.

The framework we use to test our ideas is the Plan-Do-Study-Act (PDSA) cycle. As a cycle, the completion of one leads straight onto the next, in the spirit of continuous improvement. We will go through each stage and talk about how they ‘ramp up’. But before that let’s be reassured that like data collection, our tests should be done continuously but on a small scale (initially). This has numerous benefits:

– It allows ideas to be tested quickly
– It uses minimal resources
– If unsuccessful it is of minimal consequence
– Other staff are more likely to get behind testing your changes if they are on a small scale, rather than a large permanent change to the way they work
– Multiple small cycles allow many opportunities for feedback and input from colleagues, leading to further ‘buy-in’

Compare this to how things are often done in the NHS: huge amounts of time and resources are spent designing a large new system which when implemented works poorly. Staff feel like their views were not considered and that the changes have been ‘done to them’. If only they had started small, learning what worked and didn’t before scaling up…you can hopefully imagine the difference.

Therefore it is perfectly legitimate to try your first PDSA cycle on a single patient, or a single outpatient clinic, or a single ward round, or a single TTO, or a single GP consultation. As long as efforts are made (using PDSA) to learn as much as possible, then it’s ideal. The scale can be increased, if we suspect a change is working well.

The steps to PDSA are:

Do – Go out and execute what was decided in ‘Plan’. Note any deviations from this.

Study – The most important step, that is very often missed! What happened? Was it as expected? If not, why? What have we learned about what we tried?

Act – How will what we learned in ‘Study’ inform our next cycle? Should we adopt the change on a larger scale? Were things so poor that we should abandon this particular change? Can we adapt the change to be more effective next time?

Figure 7.2, The Plan-Do-Study-Act Cycle. It's crucial to undertake every step of each cycle - don't fall into the common trap of only doing 'PD' cycles. The reason 'study' and 'act' exist is to maximise what you learn from each change to practice, to inform the next cycle. It's a continuous process.

When you get to ‘Act’, you may want to adopt the change on a larger scale or adapt what you’ve done while scaling up. This scaling up, for example to 10 patients this cycle from 3 in the previous, results in ‘ramping up’ of PDSAs: 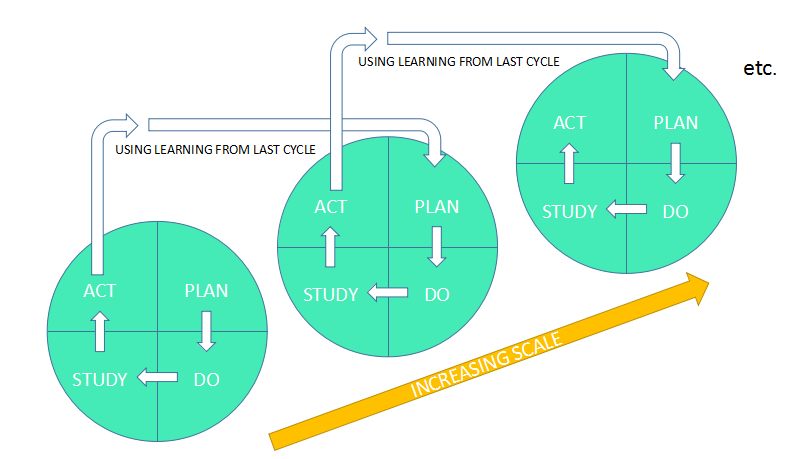 Figure 7.3, Ramping Up PDSA Cycles. Starting small, learn the aspects of your interventions that work well (adopt these on a larger scale) and those which don't work so much (either adapt, or abandon). For example in these three cycles in the diagram you might start with one patient and get feedback, tweak your intervention then use it on a bay of 6 patients, further tweak it and get more feedback, then try the whole ward. There is no limit to the number of cycles, as long as you are still learning they are still useful.

You may have multiple ‘ramps’, one for each new change idea tested. The goal for your project, as well as eventually improving the measure from your SMART aim on the run chart, is to gain knowledge about the changes to practice that have had the largest positive influence on that improvement. This is because these changes have potential to be spread elsewhere even if that area has not been involved in the project, widening the impact of your work. PDSA helps us in this.

When undertaking PDSA cycles you may want to use a template to help document what you’ve done. Page 7 of this document on PDSA from NHS Improvement is a good one.